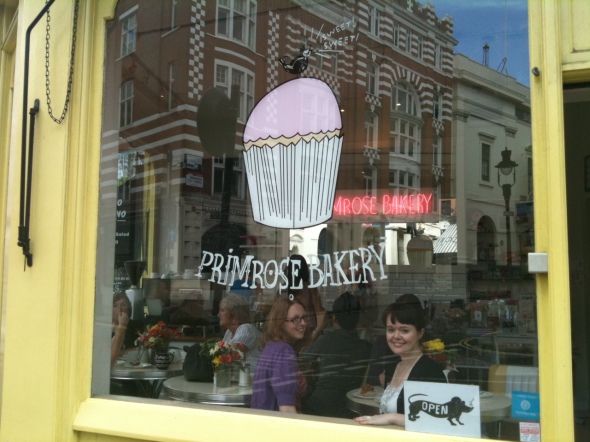 Yesterday I headed down to London with Kate, Susan and Emma for a long fun day of eating cupcakes. The first stop was the Primrose Bakery on Tavistock Street. The bakery is painted a lovely mellow yellow colour and is very cute and kitsch-y inside with diner-style tables and chairs. 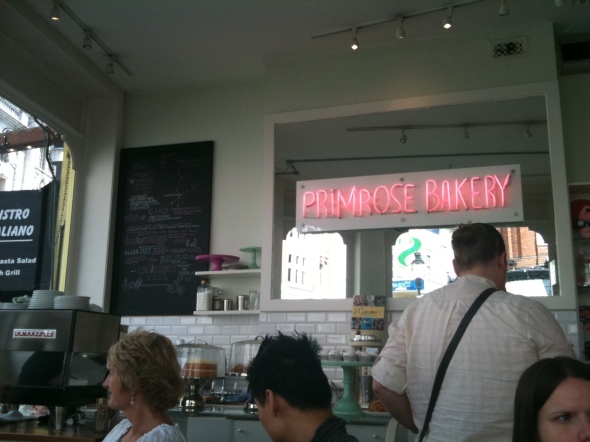 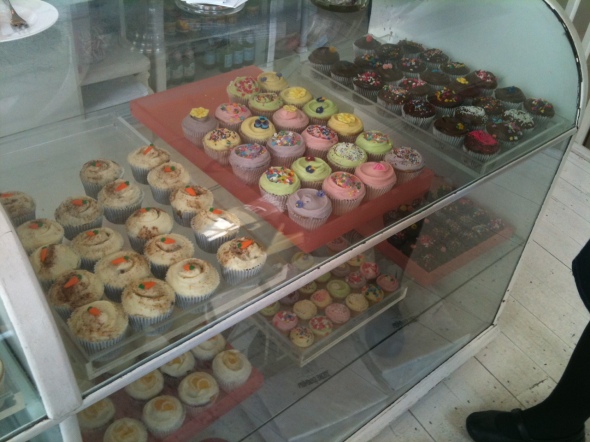 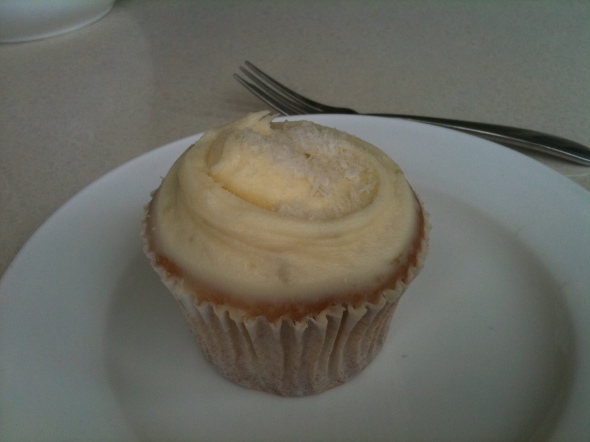 I would rate this cupcake a solid 7 out of 10. I really loved the unusual lime and coconut combination and how the zesty freshness of the lime cuts through the richness of the cupcake frosting. The cake was moist though not as evenly cooked as it could have been. The cake didn’t taste of either lime or coconut, only the frosting, and I think that this cake could have been improved with a lime glaze through the sponge.

Next stop was Ella’s bakehouse in Covent garden. On the way there we headed into the London Transport Museum where I bought this retro poster for my house.

Like most shops in Covent Garden, Ella’s is absolutely tiny. It has about 7 seats inside and some small tables outside though. 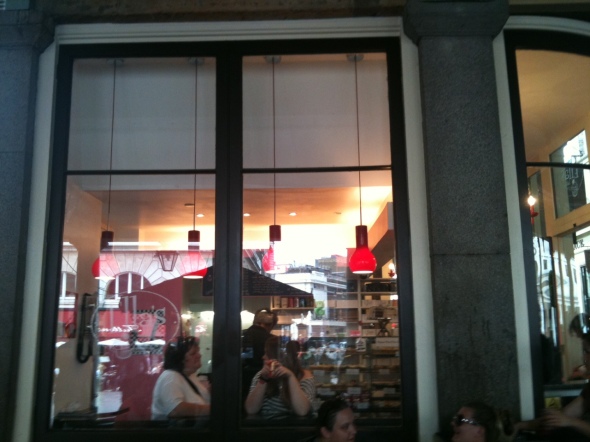 Inside, there’s a fairly small selection of cupcakes. I dithered and dithered, torn between a vanilla, black bottom or chocolate cupcake. They had some fun varities like Banoffee and Maltester too. 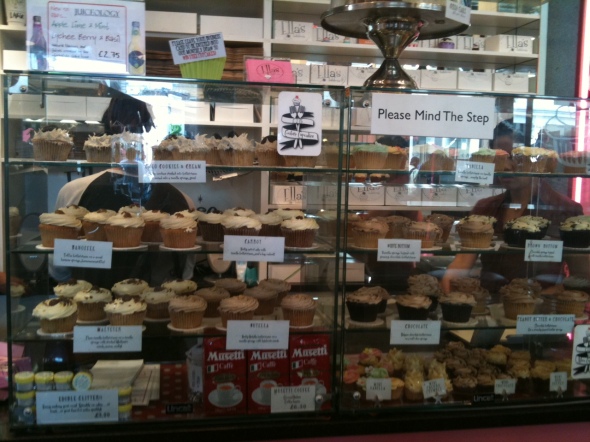 In the end I went for a nutella, which had pieces of hazlenut throught the cupcake sponge and nutella frosting. I believe it was £2.50 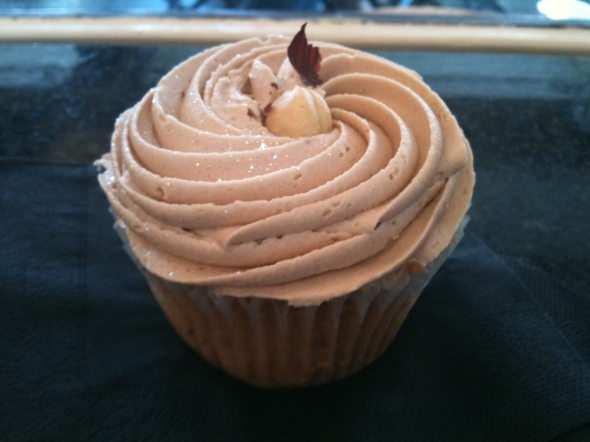 This cupcake was absolutely delicious. The small nibs of hazlenut throughout the sponge aren’t something I would have thought of myself and they really added something to the cupcake. The cake itself was light, moist, tender and absolutely lovely. Probably the best cake of the day!

I thought my cake was let down slightly by its frosting though – as you can see from the picture, its a very light chocolatey colour. It clearly had a tiny amount of nutella in it and didn’t taste at all chocolatey or like nutella. If this cupcake had had a proper nutella frosting, or nutella drizzled over the frosting it would have been absolutely PERFECT. Sigh.

Overall though I would rate this cupcake 8 out of 10 and wouldn’t hesitate recommending Ella’s bakehouse to anyone. It absolutely deserves all the praise and positive reviews it receives. 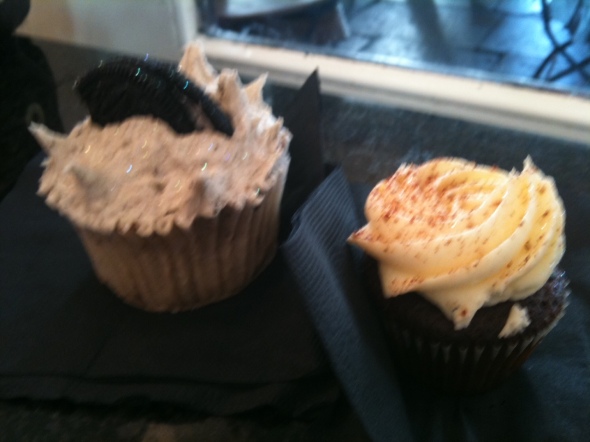 Emma had a cookies n cream cupcake and a mini red velvet cupcake which were both lovely, with one problem – a very soggy oreo!

Before we headed for lunch, I saw a branch of Laudree and couldn’t resist popping in for a couple of mini macaroons. I got a coconut macaroon and a salted caramel macaroon for Lee. They were both absolutely delicious, although my coconut one was somewhat wet and not crisp as a macaroon should be. 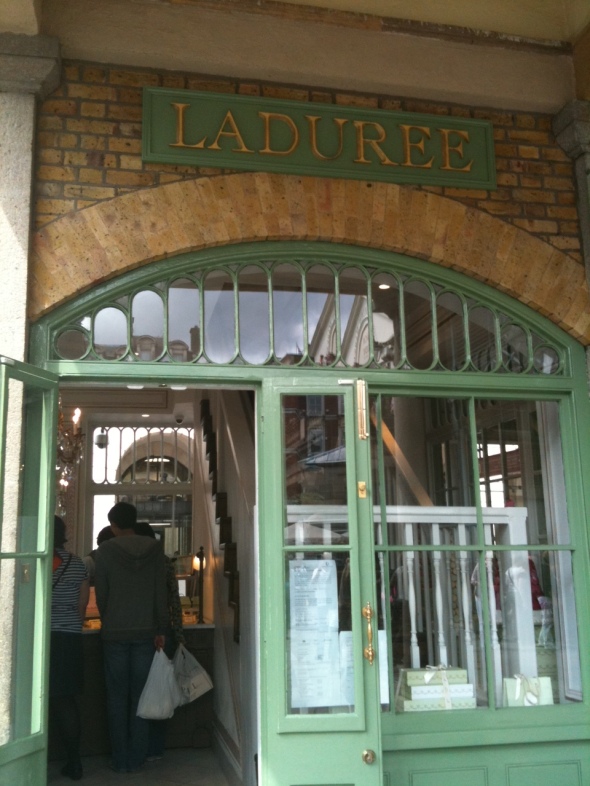 As with Benito’s Hat (coming up) Laudree was staffed by authentic french…. teenagers. Seriously, they were 16. So the customer service/communication was not exactly stellar and Emma had to wait quite a long time to get what she wanted. Grr!

Next up we decided to head to a branch of Benito’s hat  in Covent Garden for lunch. I’d read about it in a Time Out article about London’s best burrito’s. 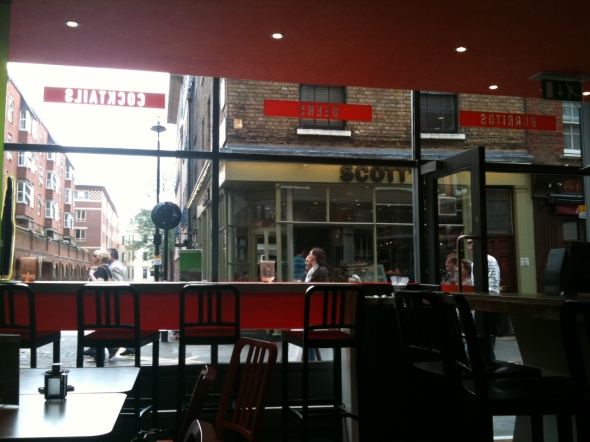 I got a chicken burrito with guacamole and a drink which came to about £9. The experience of ordering in Benito’s Hat wasn’t great at all. The staff were all mexican/spanish (yay authenticity!) which led to somewhat of an understanding problem. Out of 4 peoples orders, 2 of them got messed up (one friend ended up with a burrito instead of tacos, and with a veggie burrito instead of a chicken burrito). 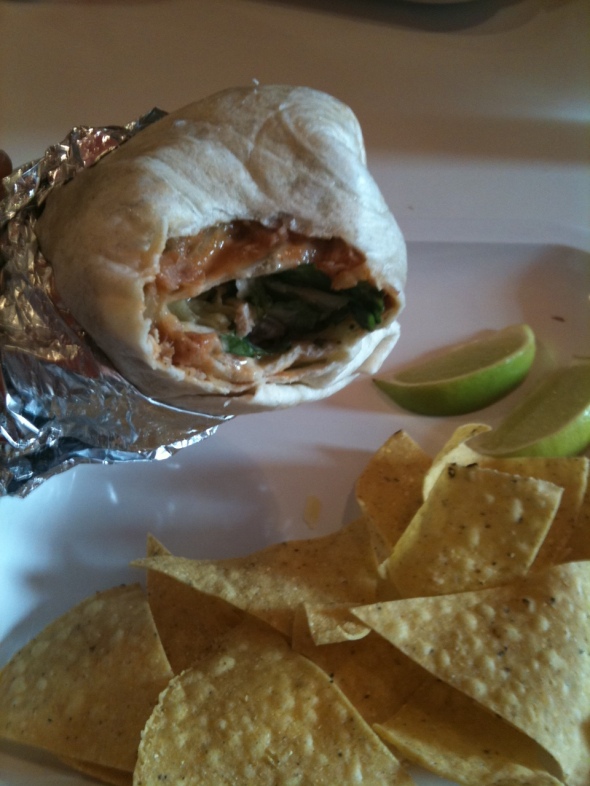 My burrito was okay. It was certainly nice to have some savoury food after all the cupcakes! But it wasn’t great. The refried beany mush inside had a weird taste to it. I think I’d like to try my hand at making homemade burrito’s in the future, but I doubt I’d want to go to Benito’s Hat again.

After that, we couldn’t resist popping into Cybercandy. I was a bit candied out so I didn’t buy anything, but my friends bought some Flipz among other things (remember Flipz? they were awesome. I wish I had some now). 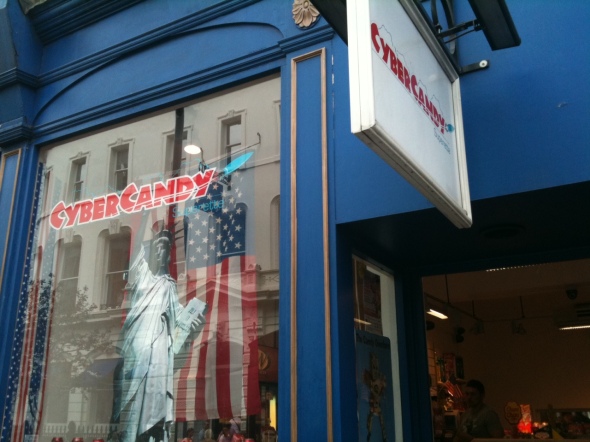 I was like OMFG when I saw these Cadburys varities by the till. ROCKY ROAD DAIRY MILK, what what!!! 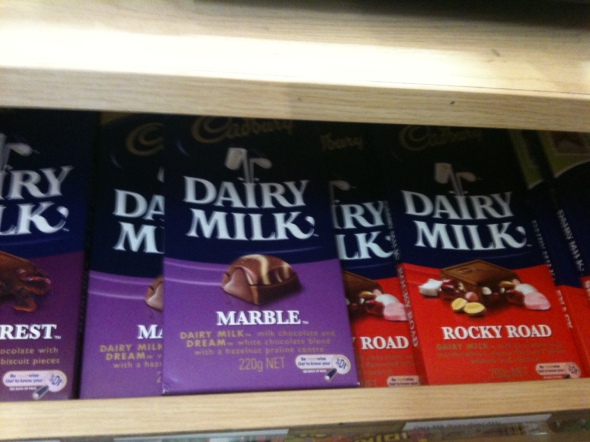 They also had macadamia and top deck but sadly it was nearly £6 (!!!) so I resisted.

Back to cupcakes!!! With excitement building (at least for me!) we headed to Wardour Street to go to the Hummingbird Bakery! 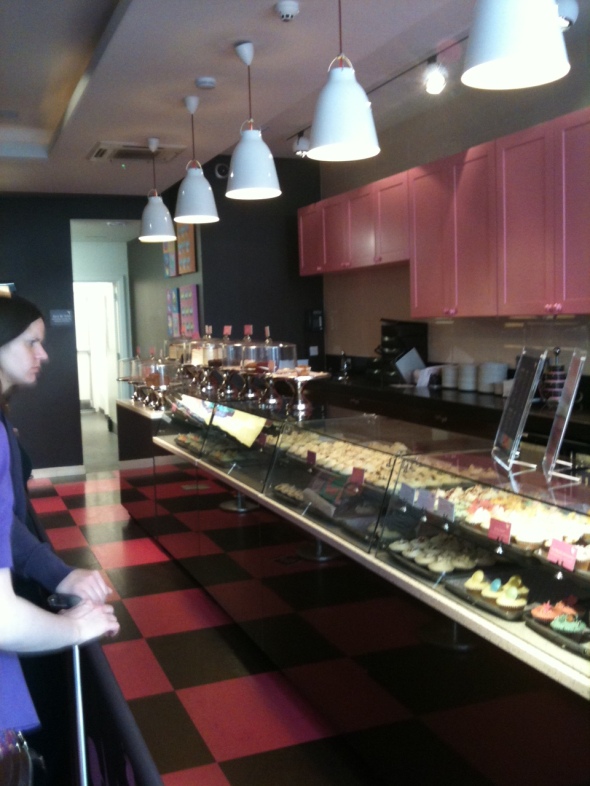 This has to be the fanciest bakery I’ve ever been into!! They had a massive variety of different cupcakes, although none of the specials appeared to me as they’re all ‘old fashioned sweets’ and I’m not that keen on sweets (only cakes!).

I got a vanilla cupcake instead for £2.50 which was good value. I also got Lee a mini vanilla cupcake. The eat in prices were more (which I guess they have to be as its so popular) so we took our cupcakes to go as there was nowhere to sit. 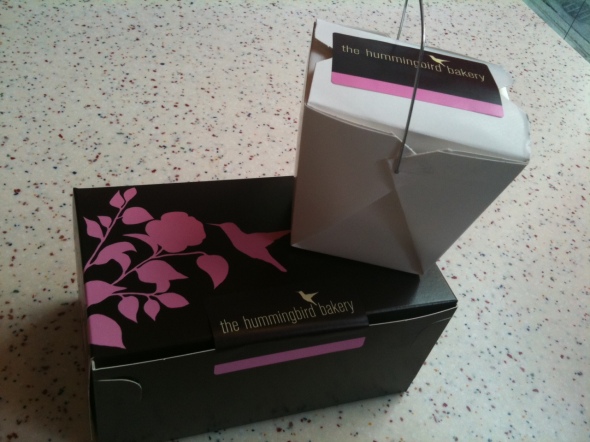 The take out boxes were included in the price and were absolutely adorable. The white one held my vanilla cupcake perfectly without it getting smushed. 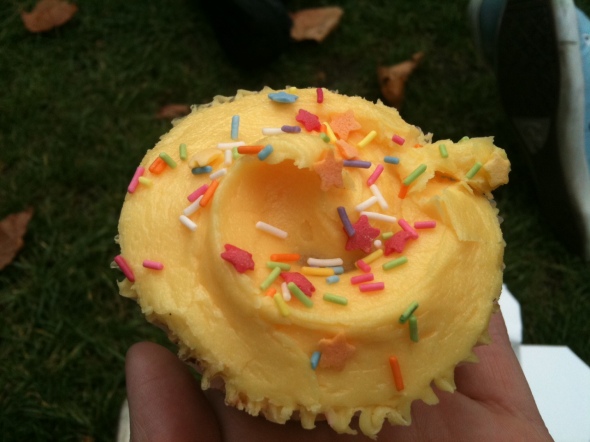 The classic cupcake! I thought my vanilla cupcake was outstanding. Lovely soft, fresh, fluffy sponge (not at all claggy like when I made my hummingbird cupcakes though they ostensibly follow the same recipe – I must have done something wrong). The frosting was very sweet and by the time I ate the last bite of the cupcake I was kind of like ‘argh sugar rush!’ but that isn’t a criticism as all frosting is sweet. Overall I loved this cupcake! I would give it 9 out of 10. 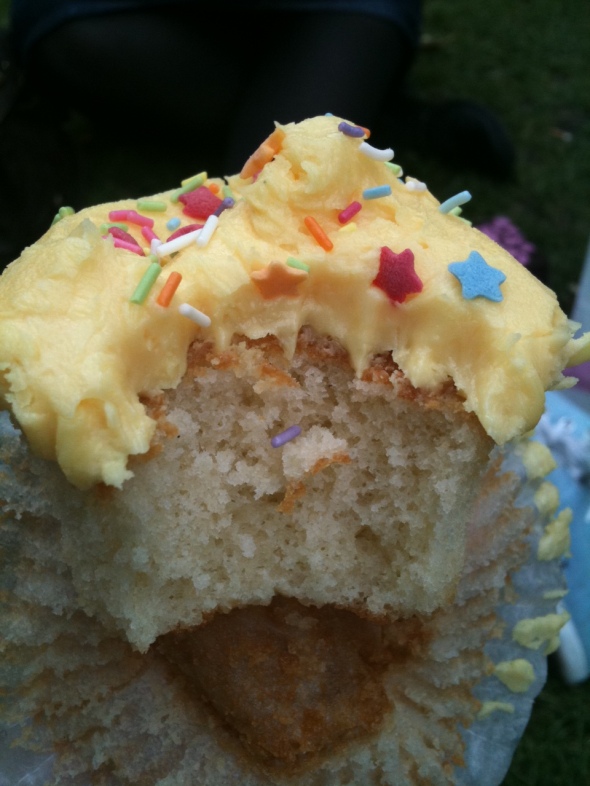 Kate got the brownie – cheesecake – raspberry cream which she said was fantastic – but very rich, she couldn’t quite finish it all! 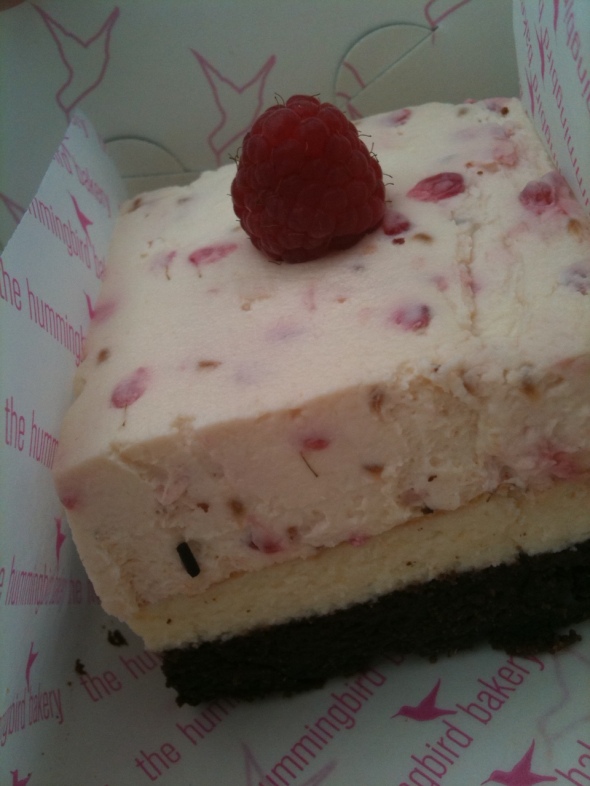 Next we headed to the new Forever 21 store on Oxford Street. I have a nice dress from Forever 21 that I got from the bullring but their stores are a bit of a jumble sale and the new flagship is of course the biggest one yet. Its three floors of seemingly randomly organised clothes which isn’t particularly easy to shop! 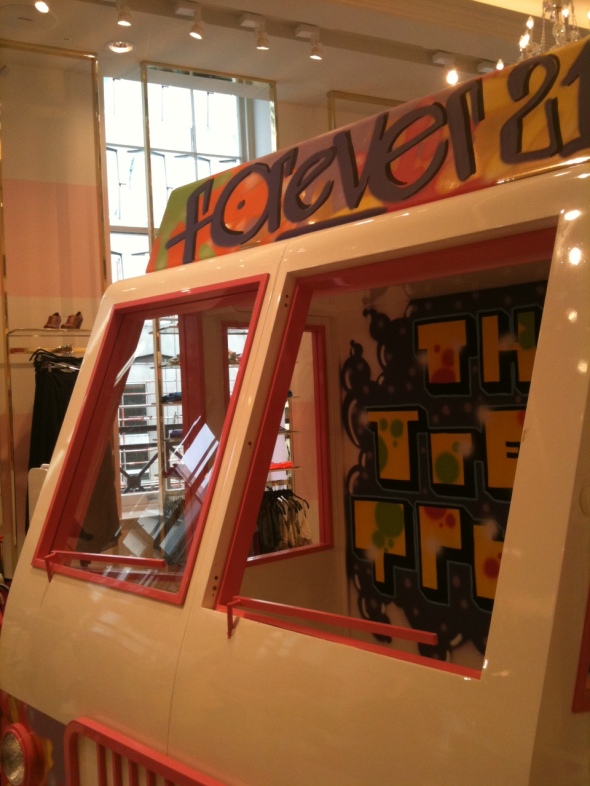 The queues were rather long… 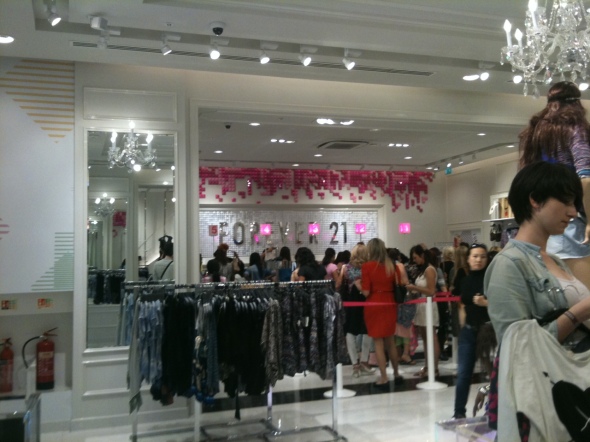 Overall, the look and feel of the store is quite cheap and tacky – the clothes aren’t merchandised in clever, quirky ways, they seem to be just plonked everywhere. Some of the clothes are also absolutely hideous/ridiculous/would blatently fall to pieces within a few days. 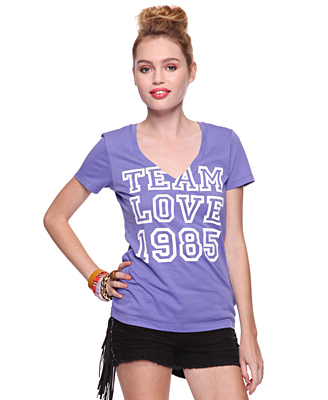 We were flagging slightly at this point, but we still had time to pop into Selfridges and check out their food hall (we were tempted by the amazing looking Lola’s cupcakes but were a little cupcaked out). 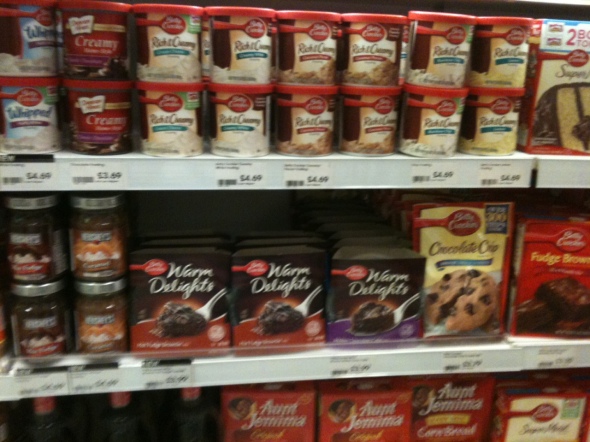 Then we stopped at the new Pinkberry counter to get some frozen yoghurt (opposite Krispy Creme near the entrance to the foodhall).

I wasn’t at all impressed with Pinkberry though the other guys really liked it! I ordered watermelon flavour but it tasted of strawberry (it WAS strawberry). False advertising! I hate the artificial strawberry taste that ice creams/yoghurts have so I didn’t enjoy this.

Another thing that annoyed me was the prices. They are ridiculous. I paid £3.20 for my plain yoghurt and to have some toppings added would have taken the total up to £5.20 (for a small).

That. Is. Ridiculous. Also, I’ve done some googling and found that their yoghurt in the US, although its considered v expensive (and not as good) as other frozen yoghurt chains – is half the price as here!

I goddamn hate when American chains come to the UK and double their prices. 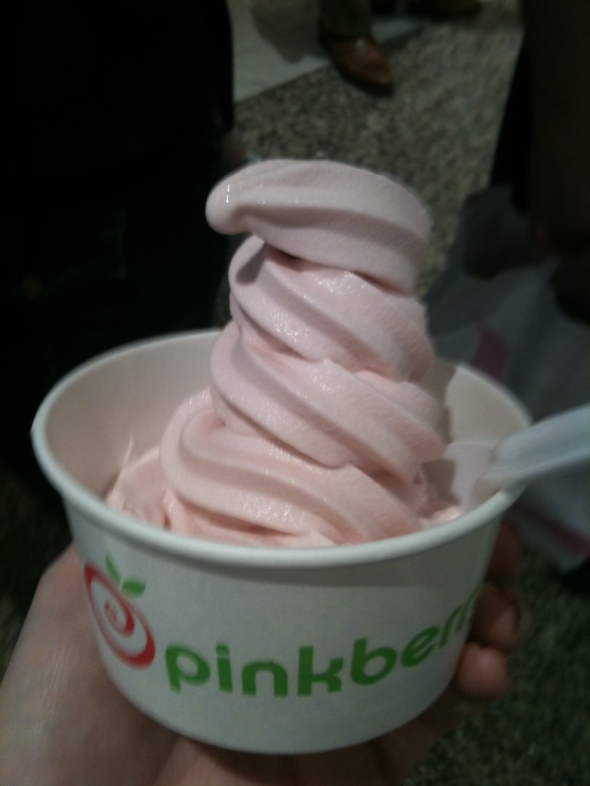 Phew! That was a long post! Pinkberry disappointment aside, I had an awesome time on the cupcake crawl! I sugar crashed pretty hard on Sunday, but it was worth it!