Everyone please join me in a chant of USA!

I realise that’s a fairly silly question, but these peanut butter chocolate fudge pretzel brownies are serious business. They certainly aren’t for the faint hearted. Oh no.

Made with rich dark chocolate and muscavado sugar for an incredible depth of fudgy flavour, swirled with peanut butter awesomeness and topped with salted pretzels, melted chocolate and a sprinkling of sea salt, these brownies are a whole other level of brownie deliciousness. Like some other things American, they’re in your face and over the top with a nostalgic charm that is pretty irresistable.

Plus, I can promise you that they’re extremely easy to make. Let’s get started!

NB – This recipe produces a batch of 8 HUGE brownies for American-sized appetities! You can halve the recipe if you’d like to produce less ginormous brownies!

I used a 13.5 inch by 8 inch brownie pan that was very kindly sent to me by Lakeland. It’s an inch deep and so easily accomodated my plus-size brownies, and they were very easily removable with zero traces of brownie stuck to the pan (in fact, I was almost tempted to not wash it up!). Thanks Lakeland!

These brownies are made the regular brownie way. First, preheat your oven to gas mark 4/175C/350F, and put your butter and chocolate into a large heavy bottomed saucepan over a low heat. Stir around as they melt.

Next, transfer your melted butter and chocolate to a large bowl and add the sugar, vanilla and cocoa powder. Check that the mix isn’t too warm before adding your eggs as you don’t want them to cook! It should be fine as long as its just warm (not hot) and you mix quickly after each egg.

Finally, add the flour and a pinch of salt and mix. Your brownies are ready to go! One quick taste test, and yep….. they’re definitely good!

Super easy, simply mix your ingredients together and voila!

Simply dollop big tablespoonfuls of the peanut butter mixture on top of your brownie batter.

You can use a skewer or knife.

Once you’re happy with your swirling, pop your brownies into the oven. Mine got around 50 minutes on the middle oven shelf until they were perfectly cooked around the edges and fudgy in the middle. However, your cooking time may vary if you use a different pan or make the recipe in different quantities. Just keep a close eye on the brownies, testing them with a toothpick regularly for doneness.

Once the brownies are out of the oven, press a salted pretzel into the top of each one. I used Tesco giant salted pretzels which are about three inches across and which meant that my brownies were also giant! If I made these brownies again I would probably buy the smaller Penn State pretzels so that it would be easier to cut the brownies into smaller chunks. 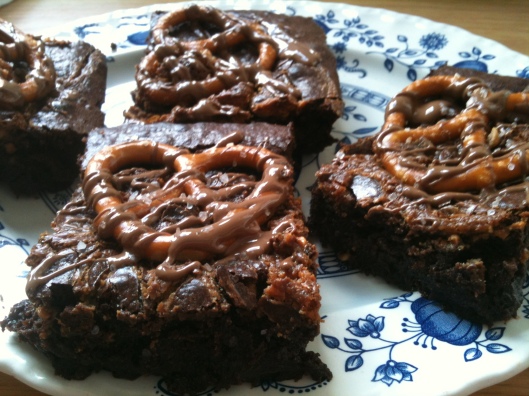 I also melted about 30g of milk chocolate (again the Chocolate Blog chocolate chips) and drizzled it onto the pretzels. This was just to ‘glue’ the pretzels to the brownies. Sprinkle over sea salt, and you’re done!

This post marks the start of my Best Bakes – USA month – aka July! Over the next month I’ll be bringing you the best of American baking (from my point of view) with lots of cookie dough, rice crispies and supersized everything!

And I’m also submitting to Cupcake Crazy Gem as part of her United Bakes of America challenge – click here to see the latest round of entries!