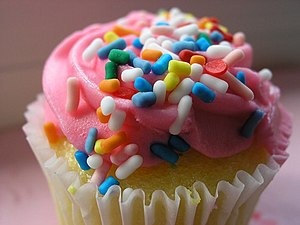 Ah cupcakes. They’ve been pretty much on top of the world for about 20 years now, fueling the opening of more cupcake bakeries, recipe books and specialist equipment than you can shake a stick at! They’re entirely different to their less popular English cousin the fairy cake. Fairy cakes are dainty and delicate and feminine whereas cupcakes are (often) pretty massive by comparison!

There are two theories about how the cupcake got their name, the first one is that they were baked in teacups back in the 1800s (which you’ll remember if you’ve been watching the Great British Bake-Off this year). The second theory is that the recipe to make cupcakes uses a cup of flour, a cup of sugar and so on and that this measurement gave the cakes their name!

It’s thought that the small size of cupcakes made them perfect for cooking over the hearth (before modern ovens) since larger cakes were a lot trickier to cook through in the heart since they would burn on the outside before being cooked on the outside.

Cupcakes started to be made on a large scale in the last century when American company Hostess started mass producing them. Hostess also make twinkies – which I personally think taste terrible! If you’re curious about trying twinkies, hersheys chocolate or other American goodies, check out Cybercandy – they have shops in London, Birmingham and Brighton and you can buy online too and the delivery isn’t too expensive.

True story – in my first year at uni I ate my way through a case (36 bars!) of these. Since everyone in the UK thinks that Hersheys chocolate tastes like sick, I didn’t even have to share! It was great!

In this country (and certainly for me!) fairy cakes rather than cupcakes are what I associate strongly with childhood and birthday parties. It was probably during the 90s (and Sex and the City helped!) when cupcakes started to become very trendy. Although I do love cupcakes, the amount of frosting on ones that you get from bakeries and shops can sometimes be far too much (even for me!) and fairy cakes are definitely much better in that way. But I also love all the creative and amazing flavour combinations that you can try with cupcakes, such as my recent chocolate chip cookie dough cupcakes, and the tiramisu cupcakes that I made for my birthday barbeque this year that were very popular!

Which do you prefer, cupcakes or fairy cakes – or neither? Let me know below!