Hurrah! It’s another in my series of Best Bakes from the USA! These little cupcakes are the culmination of a lot of work! For as long as I can remember, it’s been my dream (yes dream, dreams can be little or big, and they can totally be cake related!) to master red velvet cupcakes. I’ve had many okay batches but I knew in my heart that red velvet perfection was out there.

After many attempts, I finally mastered them! So what did I do differently? Well I followed this recipe, by the Hummingbird Bakery, (almost) to the letter. Red Velvet cupcakes are definitely fiddly, even for a very experienced baker. I also made sure to fill my cases almost to the top, since red velvet cupcakes can have a propensity to sink, and didn’t open the oven in the first few minutes of baking.

Psst – did you know that the film Steel Magnolia’s (OMG so good!) is credited with helping Red Velvets, which have been around since the 1700’s, regain popularity in the last twenty years? The film featured a red velvet armadillo groom’s cake, a southern tradition which started out in the UK but has since died out – take a look!

For the cupcakes – (recipe by the Hummingbird Bakery). Makes 16 cupcakes (for me!)

First, preheat your oven to 190C/gas mark 5/375F and pop your cupcake cases into your tin/s. I used cute red gingham cases which were from Sainsbury’s and they looked lovely. Next, whisk up your soft butter with the sugar in a mixer, or by hand, until the mixture is very soft and fluffy. Add the eggs one at a time, scraping down the side of the bowl as you go.

In a second bowl, sift your cocoa powder and add the two teaspoons of Christmas Red gel food colouring and the vanilla essence. You should be able to bring the mixture together into a paste. Add to the sugar-butter-egg mix, and stir thoroughly until everything is combined. Sift your flour and salt into another bowl, and then add to the cake mix in two batches, adding the buttermilk in between batches of flour, and mixing very thoroughly. Finall, mix your vinegar and bicarb of soda in a small bowl or mug, and add it to the cake batter (FIZZ!). 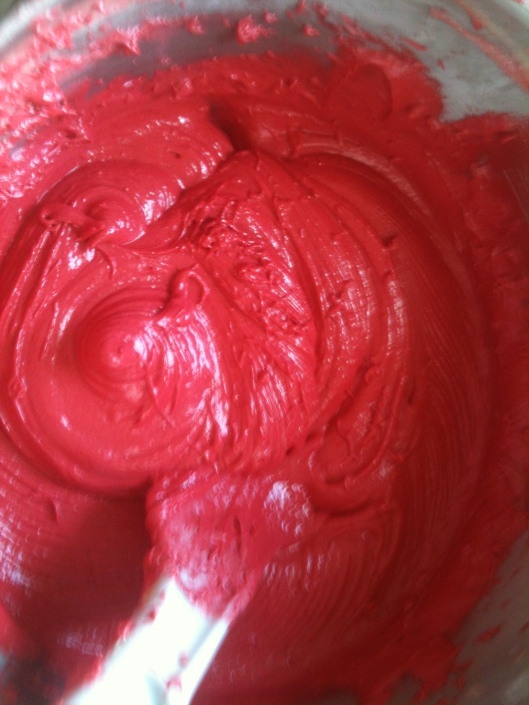 Spoon your batter into cases so they are just over two thirds full. Bake for 18-20 minutes, being sure not to open the oven door for the first ten minutes of cooking so there’s no risk of your cakes deflating. Cool the cupcakes on a wire rack, and don’t try to frost them until they are completely cool.

This recipe uses one batch of perfect cream cheese frosting – just follow the tips in that post and you’ll have fabulous frosting! Oh, and I’d recommend making your frosting as soon as your cupcakes have gone into the oven, and then putting it into the fridge to stiffen up even further while the cupcakes bake and cool – it will allow you to pipe even pretty swirls with your frosting. For these cupcakes, I piped a rose swirl using a 2D tip by Wilton. To do a rose swirl, start piping in the middle of your cupcake, holding your piping bag upright. Swirl slowly around until you reach the edge of the cupcake, and stop applying pressure to your piping bag and let your frosting fall and blend in with what you’ve already done. Watch this video to get a better idea.

For the pretty red crumbs which I decorated the swirls with, I just took one of my less pretty cupcakes (it had sunk quite a bit in the middle) and blitzed it in a blender for a second or two – you can also crumble with your hands. Sprinkle over your frosting as soon as you’ve done each cupcake.

So there you have it – the prettiest red velvet cupcakes!