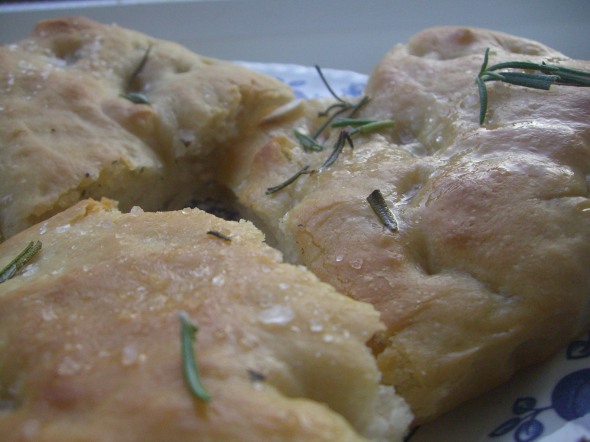 Yes, this is it! That troublesome focaccia from The Great British Bake Off that caused so many problems for some of the bakers. I’m happy to report, with slightly more than a smidgen of smugness, that my focaccia turned out perfectly! However I definitely had an edge thanks to having watched the contestants struggling with it first – I followed Paul’s recipe to a T and made sure to add ALL of the water!

Here’s what you need to make the bread – good news – its probably all stuff you already have in your cupboard/garden! Just a note on the quantities – I halved Paul’s original recipe as it made two loaves – the resulting focaccia was exactly perfect for two people for dinner. If you want to feed more, just double or triple the quantities below.

First, measure out the flour, olive oil, salt and yeast into a large bowl. Put the yeast and salt on opposite sides of the bowl as the salt will kill the yeast if it gets a chance.

Now, add 150ml of the water, leaving roughly 50ml to be added. Stir the mix into a dough with a wooden spoon. Gradually add the remaining water.

Important – at this point, all your bread making instincts will be telling you that the dough is too watery. But FIGHT the urge to add more flour (like that poor bloke on the bake off!).

Coat your hands with olive oil and start kneading the dough in the bowl for around 5 minutes. It will be annoyingly sticky, but the focaccia will taste amazing. PERSEVERE! Be prepared to add more olive oil and wash your hands often!

After kneading it in the bowl for 5 minutes, I turned it out onto an oiled chopping board and kneaded for another 5 or so minutes. Suffice to say there are no pictures of this because my hands were both completely covered in white goo.

I have to say, it was a very strange experience compared with the type of breads that I more typically make, and I can completely see why the bake-off contestants went awry. You have to just accept that the dough will completely stick to your hands and get on with it the best you can. 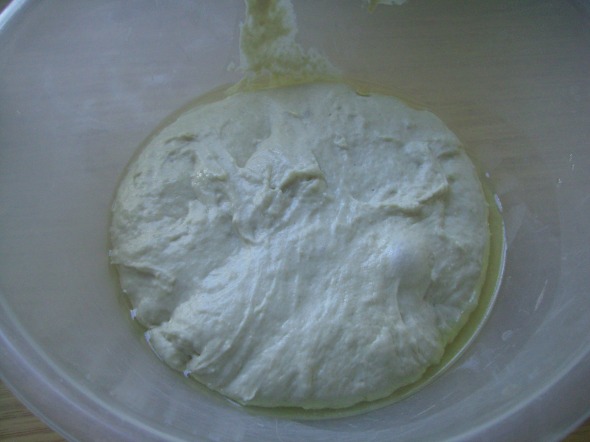 Once you think you’ve kneaded it enough, put the dough into an oiled bowl to prove. The first proving should be for around an hour, or until its doubled in size. I couldn’t detect a massive size difference in my dough post-proving and thought that the recipe had gone disastrously wrong at this stage. But I carried on regardless, and after about an hour I transferred the dough into a rectangular tin lined with parchment paper. Push the dough to the corners of the tin, and push your fingers into the dough to give it the dimpled focaccia appearance. 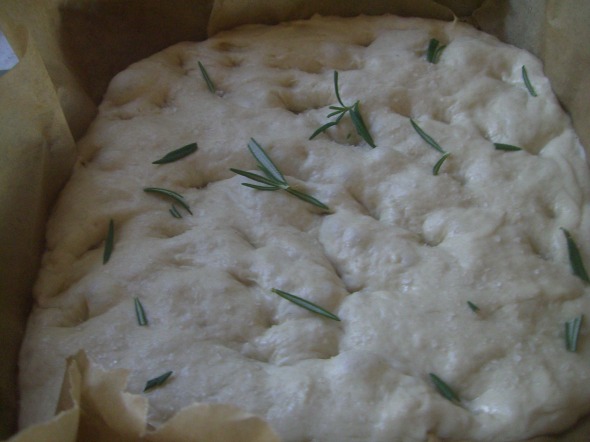 Leave to prove in its tin for another hour, covered in a tea towel. Near the end of the second proving time, preheat your oven to gas mark 7. Just before you’re ready to pop it in the oven, sprinkle the focaccia generously with sea salt (I use Saxa), chopped rosemary and a couple of tablespoons of olive oil.

Bake until its well – browned all over, around 45 minutes.

Once its out of the oven, I garnished with more fresh rosemary.

This focaccia bread knocked my socks off when, after the seeming failure of it to rise or behave, it produced amazing bread which Lee declared the best ever! Hurrah!

Yum – make this soon – its amazing! What’s your favourite kind of bread? Focaccia is definitely up there for me – I love the rosemary/salt/olive oil combo!