Probably the easiest people for me to surprise new people when I meet them is for me to tell them that I’m the President of the Nottingham city branch of the Women’s Institute. They’re all like “What, but you’re not a granny!” (paraphrasing)(Also theoretically I could have been a granny by now, but I would have had to have a kid at 13 and then they do the same…. I’m going off on a tangent!).

People don’t generally expect anyone young to be involved with an organisation like the WI that has such a stereotypical image. Although the image can be staid, the actual Women’s Institute is full of massive variety between different groups, spanning the continiuum between ultra traditional and modern. Our WI doesn’t sing Jerusalem or produce great quantities of homemade jam, but there are plenty that do.

In general, whoever you are, there’s probably a WI that will be a great fit for you – its just a question of trying a few and going with whichever ones the best fit. Another great thing is that you can be as involved or not involved as you like – we have members who just turn up at every meeting, and then we also have people who volunteer to get involved in the organisation of our WI.

If you’d like to come along to the next City WI meeting on June 8th, at the Community Centre on Mansfield Road (NG1 3FN) at 7.30pm. We’ll be having our annual Knit and Natter/Stick and Bitch! meeting so feel free to bring along any knitting, sewing, crocheting or even just a magazine that you’ve been meaning to finish. We finish about 9.30pm. 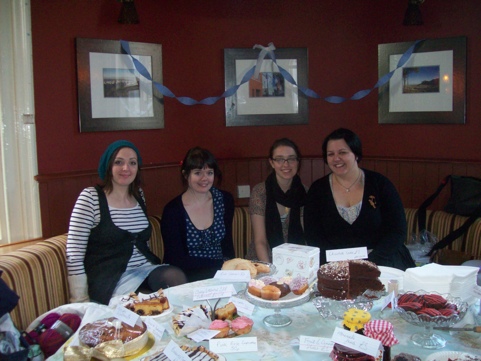 Me (second left) and other committee members at our October Fete