Shugborough is a stately mansion and historic estate dating from the 1600s. Its now in the hands of the National Trust and receives over a quarter of a million visitors a year. Since its very close to my parents house in Staffordshire, we recently visited for my mums birthday! I was very impressed with Shugborough (after initally thinking the ticket price was a bit high) as it offers far more for your money than somewhere like Chatsworth. Shugborough is £15 for a full day pass whereas Chatsworth is £16.

While Chatsworth is probably the more impressive building (and the gardens are much more extensive and landscaped), Shugborough had a lot more stuff that was interesting to me, including a restored walled garden, servants quarters (the poor servants had to sleep on VERY hard beds), a brewhouse, a mill, a working farm, and a dairy!

Here are a few (or a lot!) pictures from our visit – I hope you find them interesting! 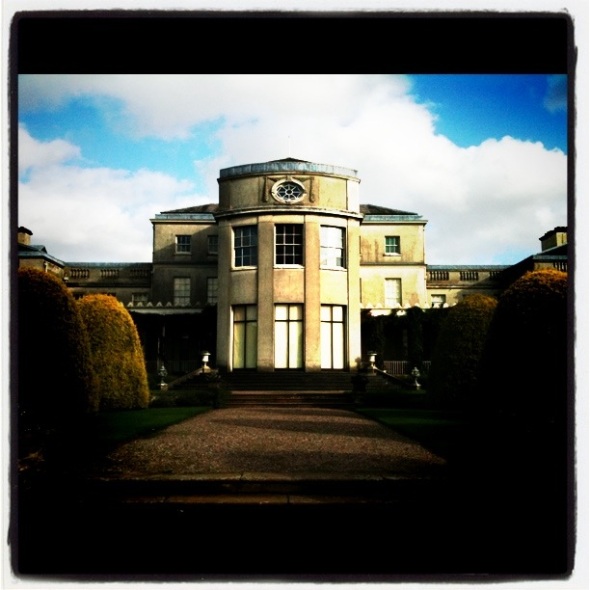 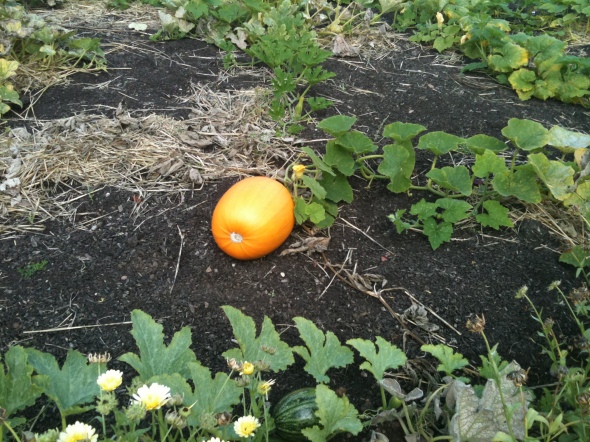 Pumpkins growing - RIGHT THERE ON THE GROUND. I'm super easily excited and thought this was really cool! 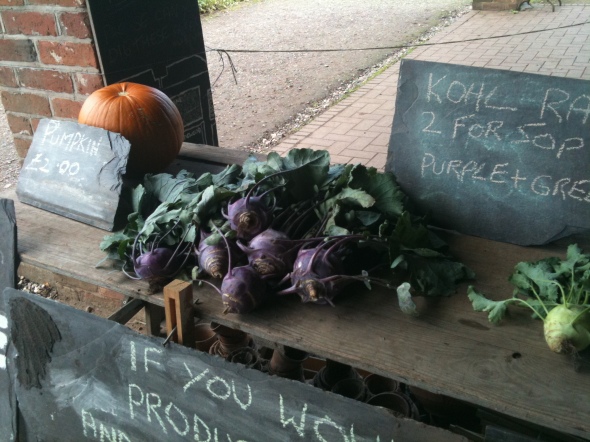 Pumpkins and other produce for sale - awesome prices! 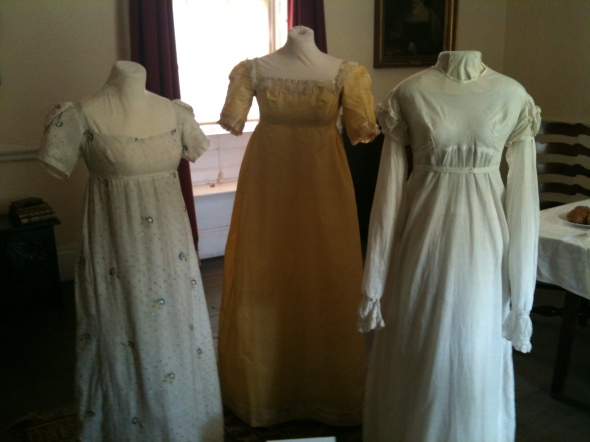 The latest fashion back in the 1800s - its all very Pride & Prejudice! But I do think it would have been a massive pain to try and do things wearing that much material 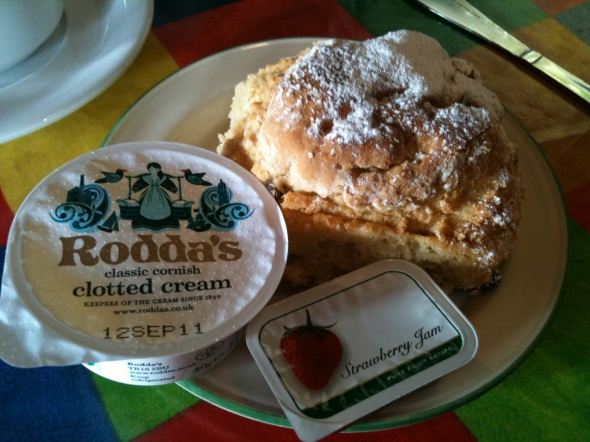 A delicious homemade scone, clotted cream and jab for just £2.50 - nice to see Shugborough aren't charged ridiculous prices for their cream teas like many other stately homes and touristy places do! 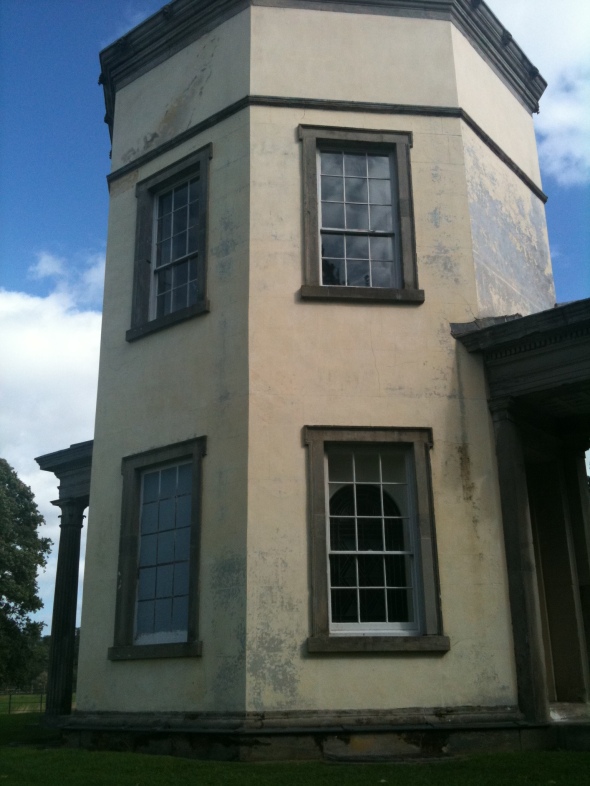 The 'Tower of the winds' was built as a gambling den by one of the lords, earls, whatever ! of Shugborough who then went on to lose all his money gambling, forcing the household to have a massive fire sale to recoup the debts! Rich people eh 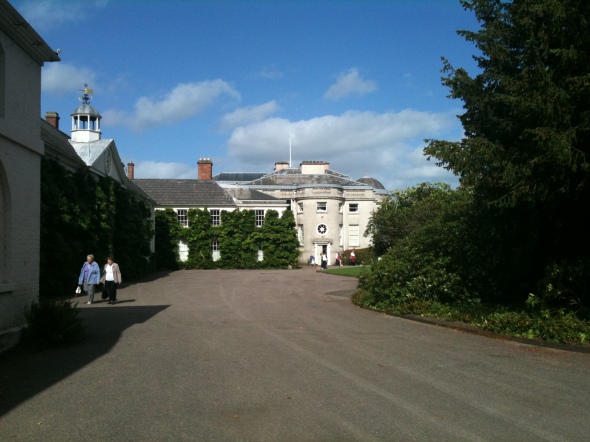 The view of the house as you approach on the drive. In front of the house is the familys pet cemetary where all of the family cats, dogs and even birds have been buried 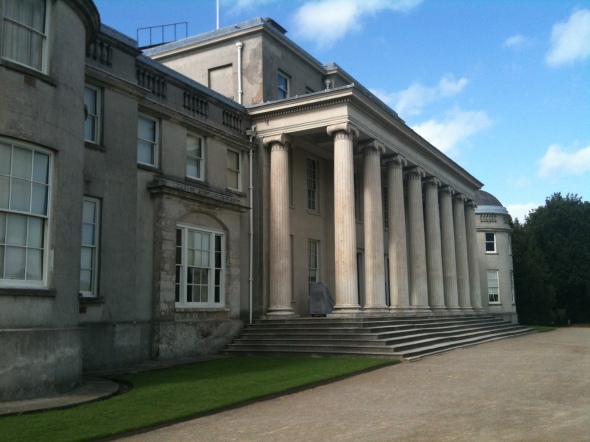 View of Shugborough from the front/side. The house was known as the 'manor house' until the end of the 1600s when the original house was demolished and replaced with a three story house. Later around 1745, the couple who inherited the house decided to SUPERSIZE IT and architect Thomas Wright added the pavillions to either side of the house, the grecian columns and various monuments around the grounds. All of these home improvements were funded by TREASURE MONEY that George Anson won at sea after capturing a spanish galleon! Spiffing 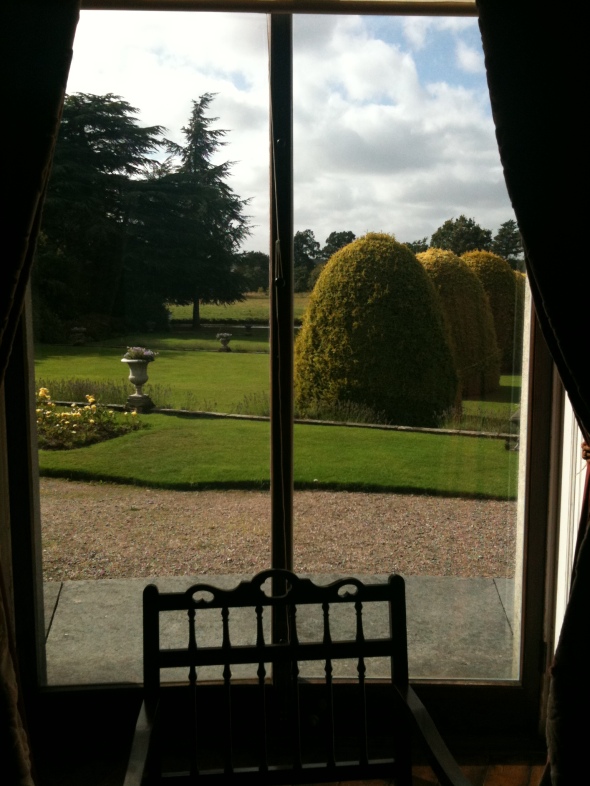 The view out onto the gardens at the rear of the house - I was a lot more interested in the architecture, views, and servents quarters (especially the kitchens!) than in the dusty, faded grandeur, chinese ornaments feel of most of the main house. I can see why they built little houses to amuse themselves like the tower of the winds - I mean, who would want to actually live there? 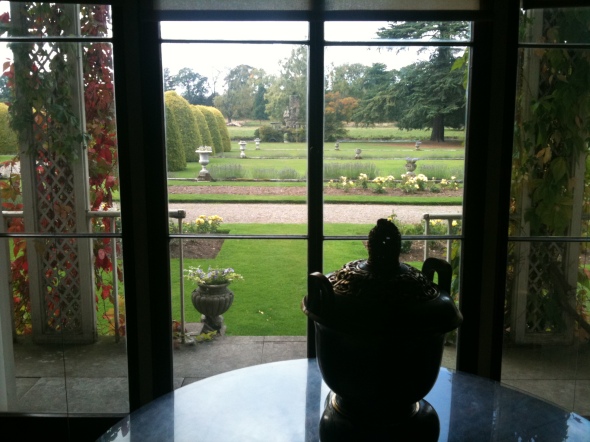 More views of the gardens, and a lovely porch area 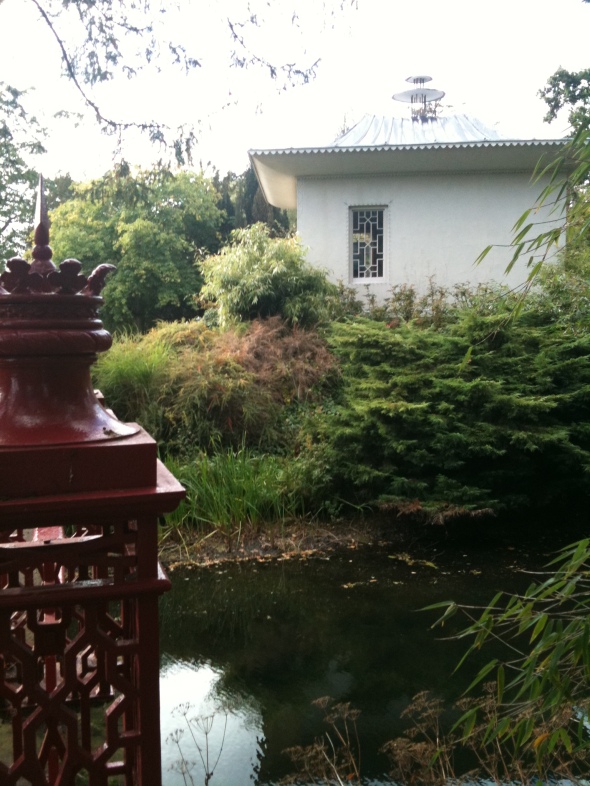 The Chinese house, (and chinese bridge) one of the many follys around Shugborough (rich people sure do love their follies!). 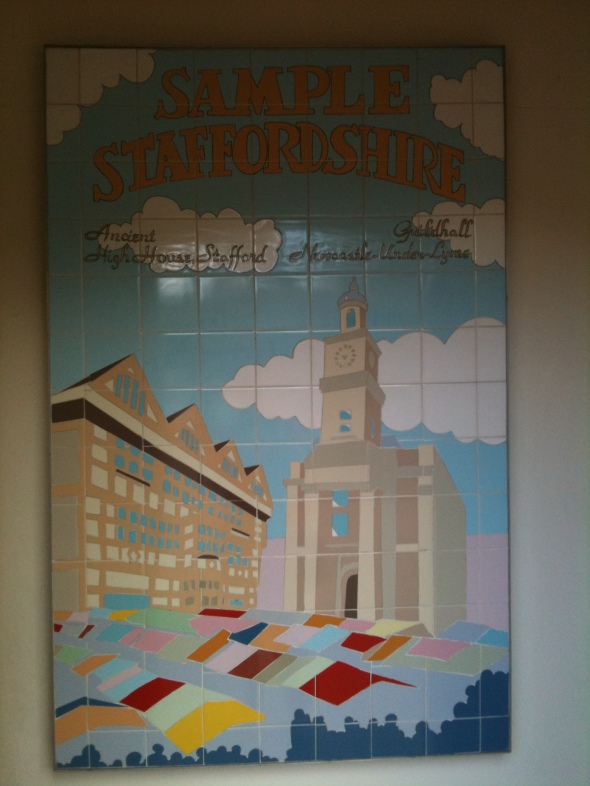 A pretty Staffordshire mural at the entrance of the ladies loos! 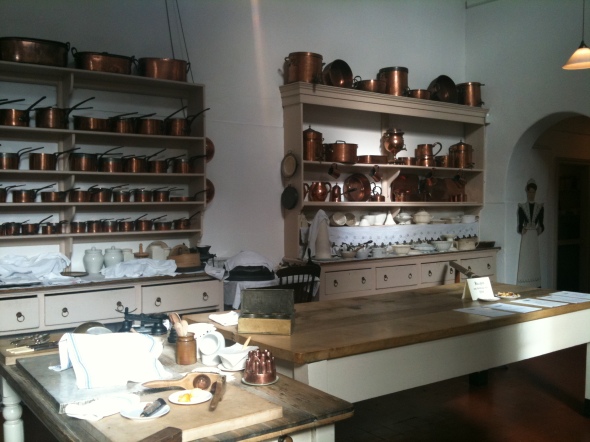 The kitchen in the servents quarters. I LOVE old time kitchens. Its so fun seeing the tools and implements they used and the recipes they made every day. At Shugborough, they have people using the kitchens and other rooms such as the dairy room, as if they were really servants from the olden days - so they actually make cheese, bread, cakes, butter, jams, chutneys, and loads more! They don't sell it at Shugborough though - they actually use it all at the main house! 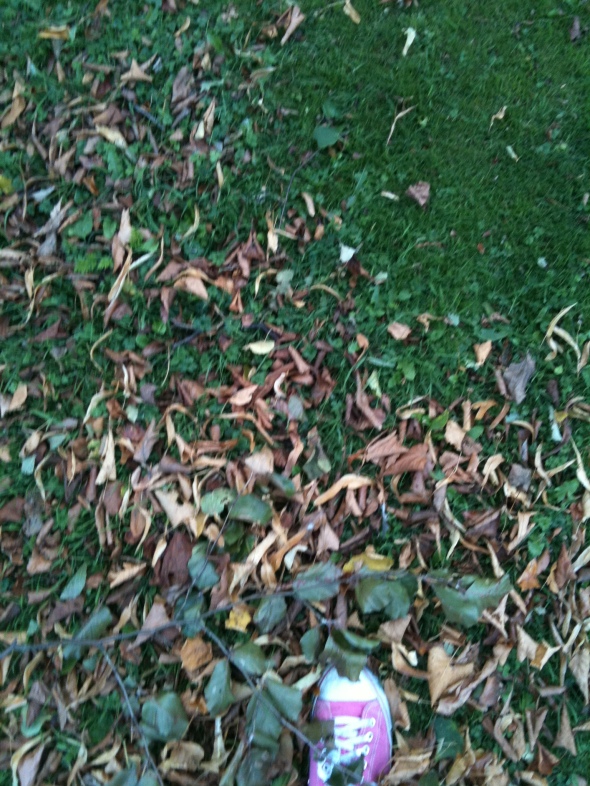 Onto the gardens! There were lots of signs of autumn - I had fun kicking the leaves around 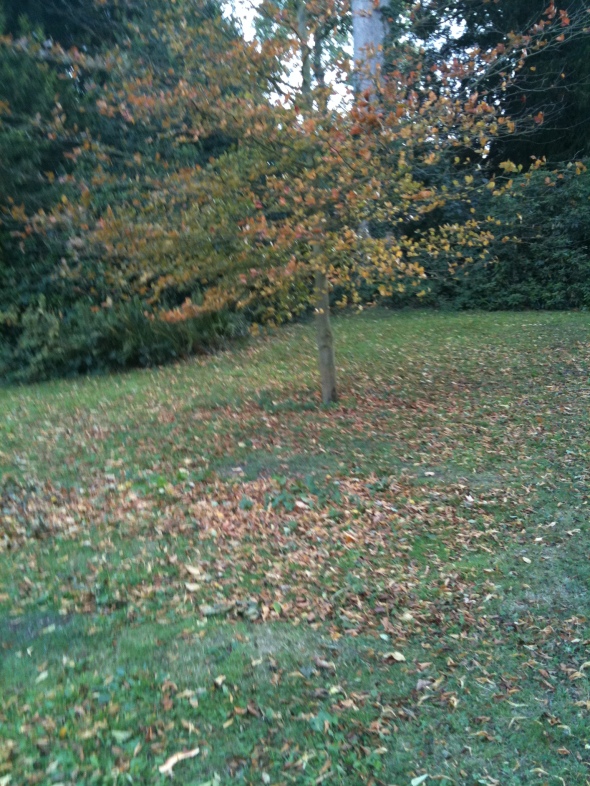 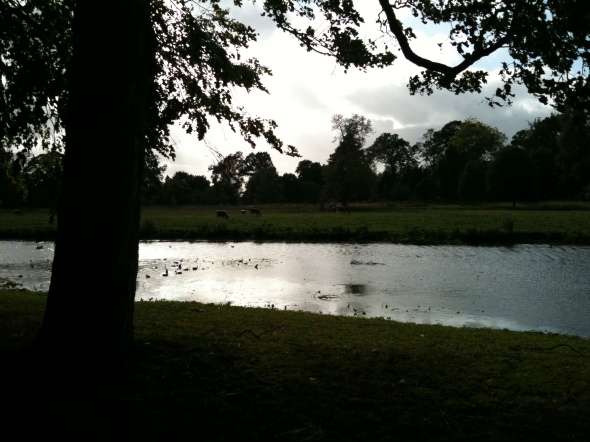 Lovely view across the river Trent - it was a very windy day - look at the ripples on the water! 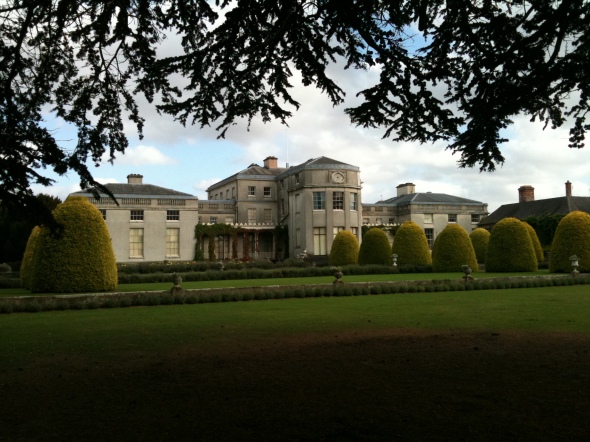 The view of Shugborough from the gardens 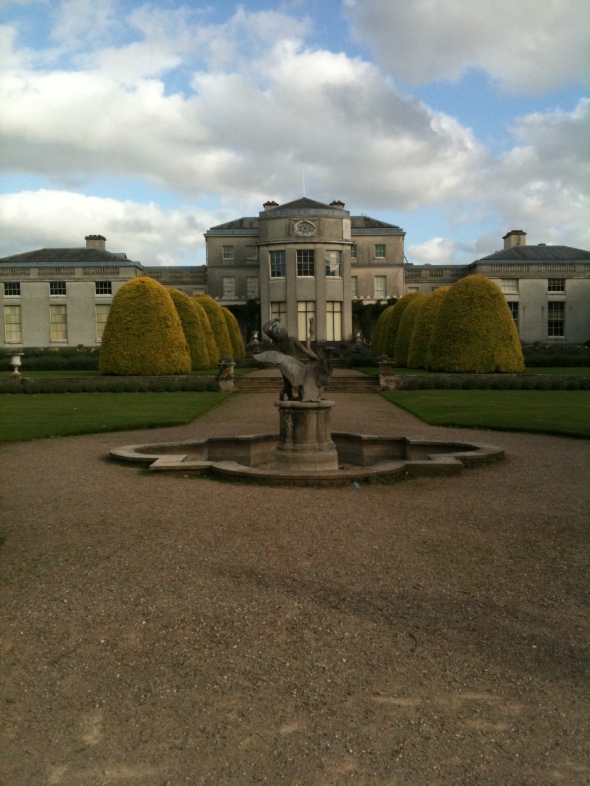 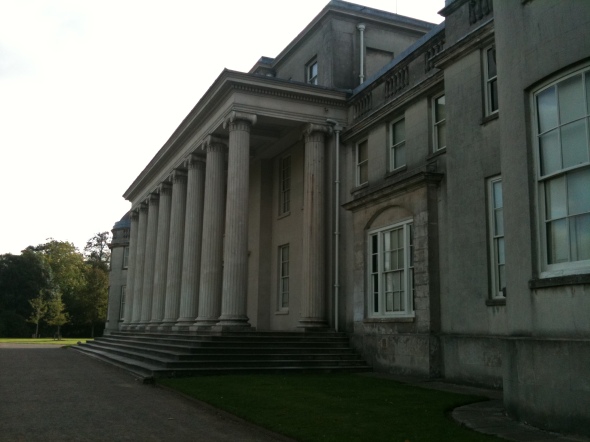 View of the front of the house - from the other side

If you’re interested in finding out more or visiting Shugborough you can find out more here. Have you ever been to Shugborough or Chatsworth – if so, what did you think, did you enjoy the experience?

I’ll also be going back to Shugborough at the beginning of December for one of their candlelight Christmas evenings and to see the house decorated for Christmas!